The BOJ unexpectedly lifted the cap on the 10-year Japanese government bond yield to 0.5% from the previous 0.25%, ending the long period of near-zero interest rates. The 10-year yield serves as a benchmark for other borrowing rates.

The central bank said the policy tweak would facilitate the transmission of monetary-easing effects, indicating that it didn’t want markets to read it as a sign the BOJ is finally pivoting away from liquidity easing.

However, risk assets did just that. The futures tied to the S&P 500 fell nearly 1% and Nikkei, Japan’s benchmark equity index, tanked nearly 3%. The Japanese yen jumped over 2% against the U.S. dollar. The 10-year Japanese government bond yield rose from 0.22% to 0.43%, while the 10-year Treasury yield jumped nearly 10 basis points to 3.69%.

The reaction in equities and bond yields is understandable, considering the BOJ’s policy of capping the 10-year yield near zero with unlimited liquidity-boosting open-ended bond purchases, also known as yield curve control (YCC), was a major source of downward pressure on borrowing costs in Asia and worldwide and supported risk-taking. The Yen was supposedly used to fund risk-taking activities elsewhere.

The central bank introduced yield curve control six years ago and remained committed to it this year even as the Federal Reserve (Fed) and other major central banks lifted rates.

“The BOJ funding was the cheapest source of liquidity,” Singapore-based crypto trading firm QCP Capital said. “While the policy tweak is not a removal of YCC, the signaling will lead people to extrapolate that BOJ governor Haruhiko Kuroda will seek to exit YCC by the end of this term in April.”

QCP added that the surprise decision to lift the 10-year yield cap to 0.5% during the low-volume pre-Christmas days has raised the risk of a VaR shock but is unlikely to have a direct consequence for cryptocurrencies.

“We doubt crypto assets are directly affected by the decision,” QCP said, adding that a big meltdown in equities could bring more pain to bitcoin.

Matthew Dibb, CIO at Astronaut Capital, voiced a similar opinion.”The initial market reaction to BOJ has been clear risk off. It’s hard to say if it will stick, however cryptos have rebounded slightly. At this stage we believe any strength or decorrelation is simply a lag. If we see equities lower, the same will be true for crypto,” Dibb told CoinDesk.

Fin Twitter is scared that BOJ’s decision has set the stage for a global meltdown.

“Bank of Japan basically broke the world tonight,” Christian H. Cooper, an ETF portfolio manager at Subversive, tweeted. “A minor policy tweak has huge implications that will take weeks to play out.”

Kyle Bass, chief investment officer at Hayman Capital Management, tweeted that BOJ will “deeply regret” the move and the emerging world is at risk due to the policy tweak.

Strong yen, a blessing in disguise for BTC?

Crypto services provider Matrixport’s head of strategy and research, Markus Thielen, said the BOJ’s move and the resulting yen strength could boost demand for other assets, including cryptocurrencies.

“Japanese stocks tend to benefit from a weaker Yen due to the export link, a stronger Yen will make Japanese stocks less attractive to foreigners as well as to locals. This might increase the interest in alternative investments – such as BTC,” Thielen wrote in a note shared with CoinDesk.

With the BOJ hinting at a potential hawkish shift with the YCC tweak and the Fed tightening priced to a large extent, the path of least resistance for the yen appears to be on the higher side.

“This year was a perfect storm for USD/JPY, as the Fed’s hiking cycle combined with the Bank of Japan’s insanely easy monetary policy resulted in a 32% move from trough to peak. I believe next year we will see a start of a Fed easing cycle and the start of the BOJ’s tightening cycle, creating another perfect storm to the downside,” Geoffrey Chen, global macro investor and founder of the Huang Chen Foundation, said in a Substack post.

The odds, therefore, appears stacked in favor of bitcoin maintaining its direct correlation with the Japanese yen. 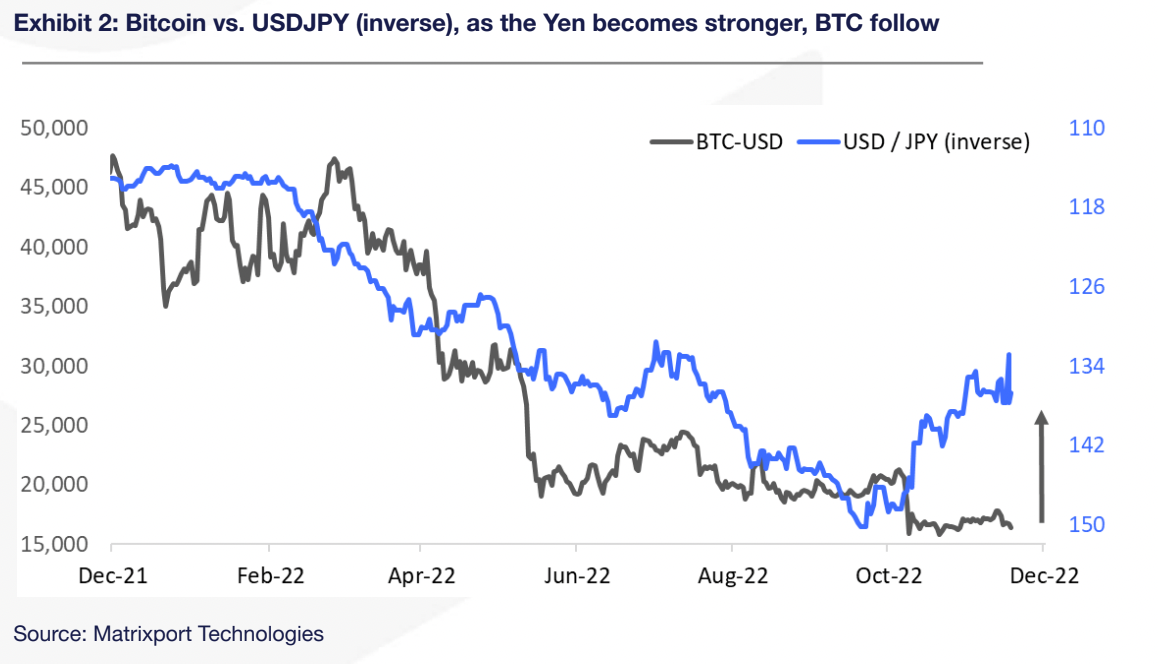 Bitcoin has closely tracked Japanese yen since late last year and could continue to do so in the near term, per Matrixport. (Source: Matrixport) (Matrixport)