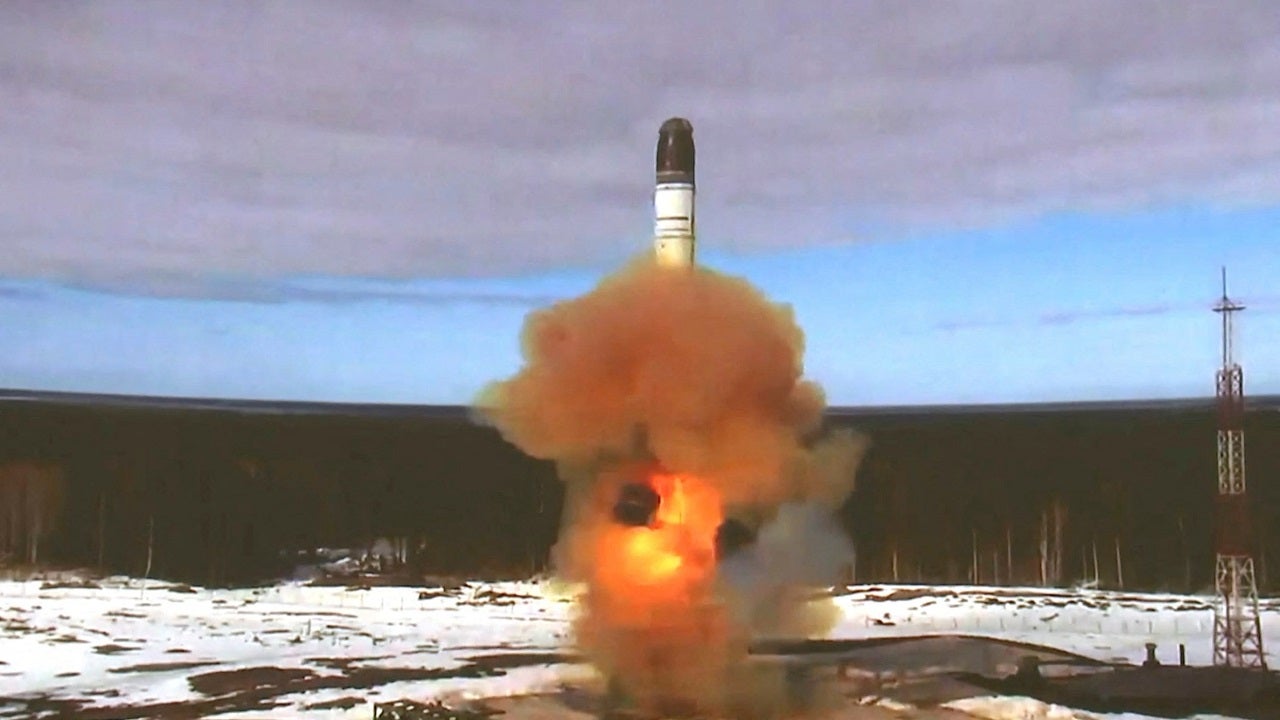 Russian President Vladimir Putin said that the Kremlin is working to ready what he previously described as the world’s “most powerful” warhead, the intercontinental ballistic Satan II missile, for “combat duty” as the war in Ukraine rages on.

The Kremlin chief acknowledged this week for the first time since the war began that his forces in Ukraine face tough times ahead, as the 10-month-long war shows no sign of ending.

Putin said military officials are now reviewing the state of the war — in which Russia has lost ground in recent months — along with its previous experience in international conflicts, like the war in Syria, when analyzing how to advance its “special military operation.”

Russian President Vladimir Putin delivers a speech during an expanded meeting of the Russian Defense Ministry Board at the National Defense Control Center in Moscow on Wednesday.
(VADIM SAVITSKY/Sputnik/AFP via Getty Images)

“We are well aware of all the NATO forces and resources that they have been using against us over the course of the special military operation,” he said Wednesday in an address to Russia’s Defense Military Board.

Putin laid out a series of plans he is looking to implement to overhaul his war effort, which includes bolstering “the combat readiness of [Russia’s] nuclear triad.”

“It is the main guarantee that our sovereignty and territorial integrity, strategic parity and the general balance of forces in the world are preserved,” he said in an announcement that comes as the U.S. looks to pledge another $44 billion in aid for Ukraine.

The Russian president championed Moscow’s stockpiles of Avangard hypersonic warheads and said Russia will continue to develop its hypersonic missiles with “unique characteristics, unmatched in the world.”

Putin also said Russia would soon ready its RS-28 Sarmat, dubbed Satan II by Western officials, for “combat duty for the first time” — though he did not specify when this would occur.

The Sarmat intercontinental ballistic missile is launched during a test at Plesetsk Cosmodrome in Arkhangelsk region, Russia, in this still image taken from a video released Wednesday.
(Russian Defense Ministry/Handout via REUTERS)

“In early January of next year, the Admiral of the Soviet Fleet Gorshkov frigate will start combat duty,” he added, noting it will carry sea-based hypersonic missiles “without equal in the world.”

Reports of communication failures among the ranks will also be addressed, Putin said while calling on engineers and weapons designers to regularly visit the front lines to address troop demands.

Top Ministry of Defense officials will also be expected to coordinate with regional heads in Ukraine as Putin looks to secure the regions he claimed to have annexed earlier this year.

Putin looked to mitigate his losses by conscripting 300,000 men into Russia’s ranks in September. However, reports of insufficient training and inadequate arms has allegedly led to high death tolls among those drafted.

“We know that there are no small things on the battlefield, so you need to pay special attention,” he said addressing his defense officials. “I want to emphasize it once again: medical kits, food, dry rations, uniforms, footwear, protective helmets, body armour — everything should be at the most up-to-date and highest level.”

“Everything that a fighter uses should be cutting-edge, convenient and reliable, and the supply should correspond to their actual needs,” Putin continued. “If some ministry standards are outdated, they need to be changed — and quickly.”

Russian military and pro-Russian separatists keep watch as civilians are being evacuated along humanitarian corridors from the Ukrainian city of Mariupol on March 24, 2022.
(Stringer/Anadolu Agency via Getty Images)

Putin compared the war in Ukraine to other top wars involving Russia, including when Napoleon Bonaparte invaded Russia in 1812, as well as both World Wars.

Russia’s Defense Minister Sergei Shoigu also announced Wednesday that Russia would be increasing its military by 30%, bringing its fighting force up from just over 1 million personnel to 1.5 million, reported Reuters.

Shoigu did not specify when this expansion would occur.