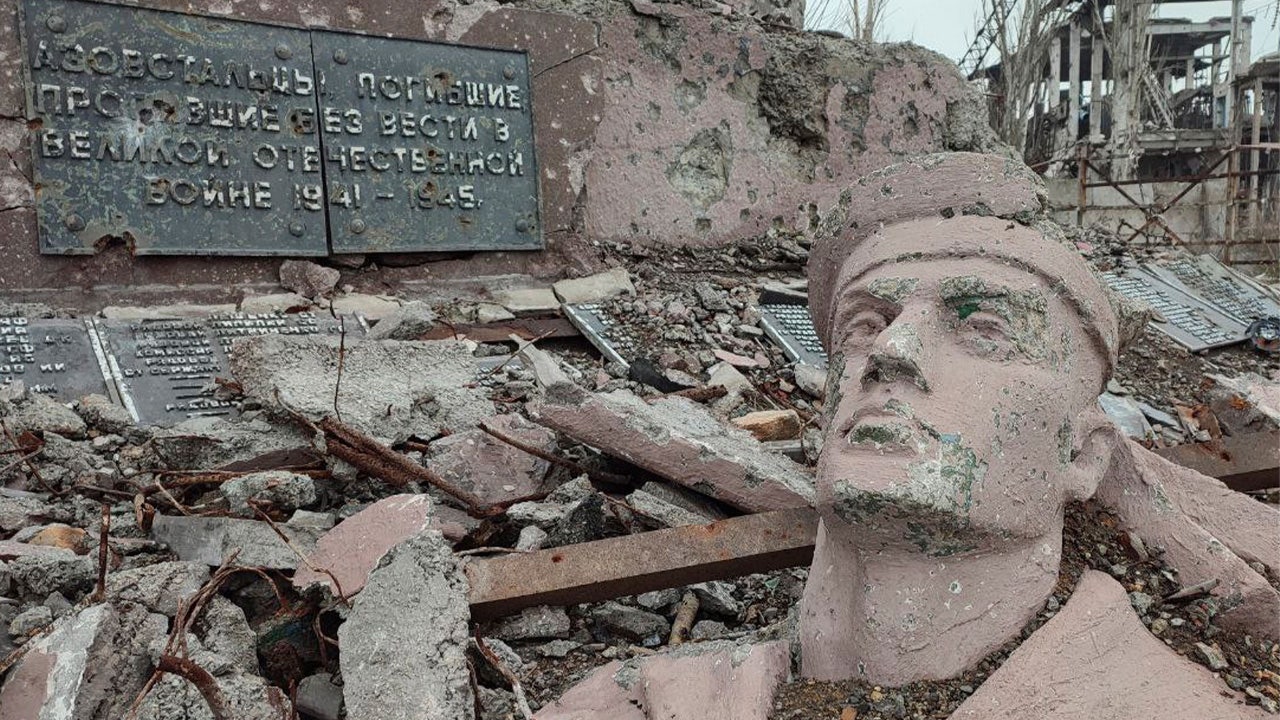 Eight months after Mariupol fell to Russia following one of the most brutal battles throughout the war, Moscow is now building over the devastation, bringing in people to fill the abandoned city and cleansing it of any Ukrainian identity.

Amid months of failing to advance the front lines and ceding major cities like Kharkiv and Kherson to Ukrainian forces, the Kremlin reportedly turned its focus to Mariupol.

An investigation by the Associated Press found that the city is beginning to resemble a Russian garrison as Moscow ushers in troops, equipment, doctors, construction workers and administration officials.

The remains of a statue and other rubble lie in front of the Azovstal Steel Mill, which was the last place in the Ukrainian city of Mariupol to fall to Russian forces in late May 2022.
(AP Photo)

Bombed out buildings are reportedly being torn down at a rate of one a day, and the extent of Russia’s deadly invasion has become even more evident as more bodies and mass graves are uncovered.

Some 50,000 homes are expected to be demolished.

The world watched the onslaught of the war as Russian forces pummeled the port city, and Ukrainian forces and civilians alike bunkered down for three months in an attempt to hold the city.

A construction worker works on the site of the new municipal medical center in Mariupol with an Orthodox church in the background, in territory under control of the government of the Donetsk People’s Republic, in eastern Ukraine, Wednesday, July 13, 2022.
(AP Photo/File)

The fight for the city eventually honed in on Mariupol’s Azovstal steel plant, where Ukrainian soldiers and civilians became trapped under Russia’s relentless bombing – blocking access to food, water and healthcare, and forcing thousands to eventually surrender.

Officials warned that as many as 25,000 civilians were killed in the siege, though according to the AP investigation that figure could be up to three times higher as rubble is removed and more graves uncovered.

This Nov. 16, 2022 image from video shows some of the new graves which have been dug since the Russian siege began, at the Staryi Krym Cemetery on the outskirts of the occupied Ukrainian city of Mariupol.
(AP Photo)

As Ukrainian troops have begun to push the front lines farther eastward in Donetsk, Russia is looking to secure its hold over Mariupol by reportedly cleansing the city of any vestiges of Ukrainian identity.

Peace Avenue, which cuts through the city, has allegedly been renamed Lenin Avenue, and Soviet-era titles have replaced street names and signs across the city.

Russia has reportedly laid out new plans for the city that will center around the historic Drama Theater – which housed hundreds of Ukrainian men, women and children sheltering from Russian shelling in the first days of the war.

The theater was bombed by twin Russian airstrikes on March 16, and as many as 600 people were killed in the strike.

This Dec. 2, 2022 image from video shows fencing surrounding the Drama Theater in Mariupol, Ukraine. Months after hundreds died in Russian airstrikes on the theater, the fencing is etched with Russian and Ukrainian literary figures as well as an outline of the theater’s previous life, before Russian occupation.
(AP Photo)

Residents who remained in Mariupol said the theater reeked all summer as bodies remain trapped inside.

In response to the devastation, Russia erected a screen around the building tall enough that it can be seen from space, AP found.

Russia apparently also plans to turn the Azovstal Steel Plant – a site that has remained a symbol of Ukrainian resistance – into an industrial park, though construction is not believed to have started on it.